Pacific islands have accounted for 79% of bird species extinctions in the past 500 years. This situation will worsen with climate change, with models predicting Oceania to be among the regions hardest hit. The Micronesian Megapode (Megapodius laperouse senex) is listed as Endangered by the IUCN (2015) and the population in Palau is thought to be in decline. The IUCN suggests that egg collecting and introduced predators are the primary threats to the subspecies. However, given its tendency to nest in beach strand cover just above the high tide line, a projected sea level rise of over a meter within the current century would have devastating consequences for M. l. senex. This subspecies is known to have already lost up to 20% of its breeding habitat due to increasing storm surges. 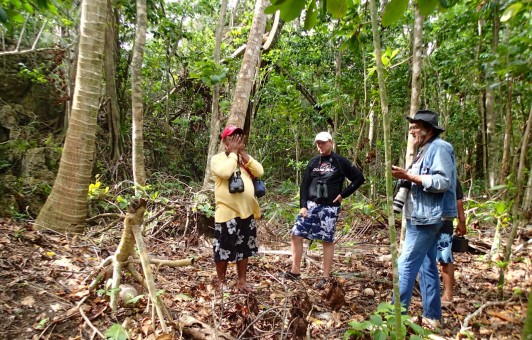 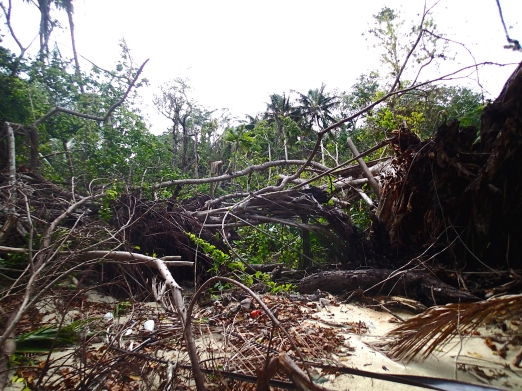 Inundated mounds like this one, are likely to become more common with climate change-related sea level rises. Pic: Rob Davis.

Additive stessors to sea level rise for threatened megapodes in Palau include tourism and introduced rats. Tourism is a major activity in the World Heritage Listed Rock Islands Southern Lagoon (RISL), an area that also supports the majority of M. l. senex in Palau. To better inform the management of tourists by local governmental and tourist agencies, we will investigate how tourism affects megapodes and whether tourist picnic areas subsidize introduced rat populations with food. Consequently we will inform efforts to better control or diminish the presence of rats for the protection of megapodes in identified key refugia. The Micronesian Megapode serves as an umbrella species in Palau. Its high vulnerability to sea level rise, ground-nesting habits, and restricted distribution mean that management actions intended to protect the megapode will likely benefit a suite of others, including the potentially endangered and poorly known Palau Ground-Dove (Gallicolumba canifrons).

As most Pacific islands are equally vulnerable to the impacts of climate-induced sea level rise, our study will have broad significance for species across the Pacific, a region characterized by having the highest rate of bird extinctions globally.